Creating a good looking thumbnail image for any post type is one of the first ways to attract your visitors’ attention to that section of the site. Showcasing an uninteresting part of an image could deter a visitor from going anywhere near that particular post. However, when it comes to cropping an image for a thumbnail from one of your images, WordPress doesn’t always do the best job.

In fact, it rarely does, especially with full length portrait images of people. What WordPress usually does is crop the image at the centre, and whatever happens to be in the centre of your image, will appear as the thumbnail. Be it a part of the background, or the midriff of a person, WordPress doesn’t discriminate.

This can be displeasing and look down right silly at times. So, let’s face it, we’d all like some sort of solution that can detect faces automatically and create a good looking thumbnail for us. Well, that’s where My Eyes Are Up Here comes in. It’s a simple plugin that uses face recognition and hotspots to feature the best part of your image as the thumbnail.

What you see is what you get with this plugin. There’s no frilly add-ons or excessing settings. In fact, all you get as soon as you install and activate this plugin is an extra section in the image details page called Face Detection, as can be seen with the photo of myself below. 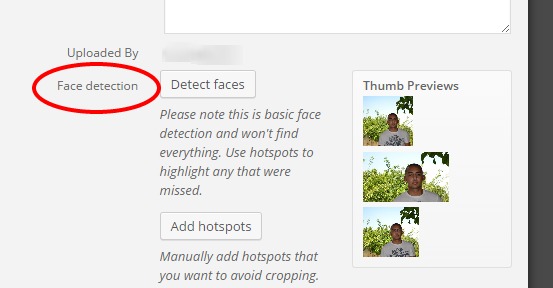 This section gives you two options. The first is called Detect Faces; and it does exactly that. It scans the image and looks for faces, adding a hotspot to every one it finds. A hotspot is simply an area of the image that the thumbnail will focus, and zoom in, on. Every image can have more than one hotspot.

So much so that the next option underneath Detect Faces is Add Hotspots. You can add as many hotspots as you’d like. However, remember that the further apart they are, the less zoomed in you’re going to be on the part of the image that you want to showcase. 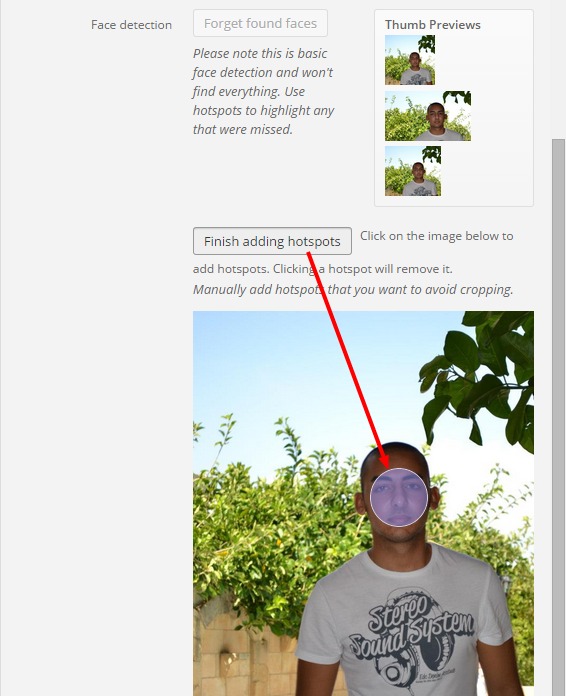 If you do select too many hotspots scattered all around the image, it will focus around the centre of these hotspots, once again giving you an undesirable result.

Once the faces are detected, and hotspots selected, the Thumb Previews will show you which part of the image will be shown as the thumbnail. It’s as easy as that.

This plugin is free from interconnect/it, so head on to the wordpress.org plugin directory and give it a go for yourselves.