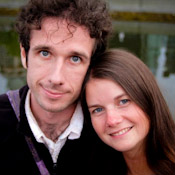 Today’s interview brings us in touch with Simon Fairbairn, a WordPress freelance designer and developer who has been travelling around the world with his partner Erin since 2010.

Let’s discover how he manages to combine his love of travelling (you can see all the places he has lived in on his blog’s map) with keeping clients happy with his WordPress freelance services. Simon has been kind enough to give us lots of information about his travels and the way he works, so make yourself a nice cuppa and enjoy the read!

Thanks for joining us today Simon, let’s start with some introductions. Tell us a bit about yourself, your travels, how you started your business Line-In and how long you’ve been using WordPress.

I actually left university with a music degree before going to work for a law firm where I practiced law for three years as a legal caseworker. Then in 2008 Erin and I took our first trip around the world, which turned us on to travel in a big way. We had created a travel blog for our first trip that I had built myself but when I later discovered WordPress, I found out that this was the software that I had inadvertently copied when designing it—it would have saved me a bunch of time if I had discovered it sooner (moral: always check out the existing options before rolling your own)!

On our return in 2009, I made a very short-lived attempt at a music career, then started Line In Web Design. It was around this time that I seriously started looking at CMSes and after trying out Joomla and Drupal, I eventually settled on WordPress. I think it was version 2.6 at that point, so it was gathering momentum but still many people were still dismissing it as purely blogging software.

After doing a few freelance sites, I landed a job as a web developer at an internet marketing firm.

I liked the work but hated the commute and neither of us were enjoying being back in the UK, but it was here that I learned about the potential for making money online and I turned Erin on to a course about blogging. It was also around that time that she found about other digital nomads who were making a living while travelling. Web Design is pretty much the ultimate in transportable jobs—I don’t think the Universe could have been more obvious had it slapped me around the head with a flashing neon billboard.

So in 2010 we sold up everything and left, this time for good. 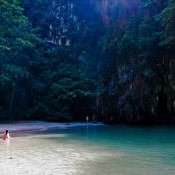 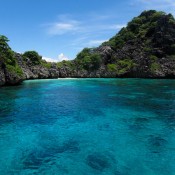 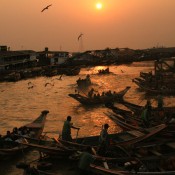 You’ve been travelling as a couple for the past 2 years now, could you share a few tips for others who would love to do the same thing?

The biggest thing is just to do it. There is never a ‘right’ time and there are always reasons not to do it (houses, pets, kids). But if you set a (realistic) date and amount to save, then do the work to save that amount, it’ll happen.

Dreams tend to remain dreams unless you drag them down from the clouds and slap some numbers on them.

Out of all the locations you’ve been to, which is the best for a digital nomad/freelancer? Have you met any other WordPress developers during your stays?

Chiang Mai was great for meeting other digital nomads who were working with WordPress. It’s cheap and exotic but very well connected. However, for a place by the beach, we love Koh Lanta, again in Thailand. It’s not over-developed like some of the other Thai islands but still has great connectivity and a bunch of amazing beaches.

How do you balance work and travelling? I imagine at times it might be hard to work when you’ve got such amazing scenery to explore all around you, do you work hard for a few days and then take a few off, or do a bit of exploring daily?

I struggled with this for over 2 years, often favouring work over life, but I recently read Neil Fiore’s The Now Habit and it really sorted me out. Now I tend to work for a few hours in the morning, then have a long leisurely lunch (maybe 2/3 hours) then do a couple more hours in the afternoon. Sometimes, if I’m really in to a project, I’ll just keep going all day but it’s actually really good for my creativity to take longer breaks. Gives the subconscious time to chew on things. We also have one guaranteed day off a week where we’ll take a day trip somewhere.

I’m actually getting as much (if not more) done as I was when I was grinding on 10 hour days but I’m much, much more balanced.

Apart from Line-In, you also run two popular blogs (Neverendingvoyage.com and keralaindiatravel.net), do you split the writing tasks as a couple, and how important is blogging and sharing your experiences while travelling?

Erin takes care of most of the writing on Kerala and Never Ending Voyage—it’s basically her full time job—and I maybe contribute one post a month. I’d love to do more but design and development generally pays a little better than blogging (although it’s getting close).

We actually set out with Never Ending Voyage to create something to inspire others to travel rather than to simply keep our families up to date, so we knew from the start that it wasn’t just going to be a travel journal type thing. To be honest, I’ve always considered blogging to be more like a performance than a diary.

Blogging  has been super important to our travels. Not only financially, but also in the wonderful people we’ve met and the great connections we’ve made. We attended the TBEX Travel Bloggers conference in Vancouver last year and it was amazing meeting this online community in person. Would have never had happened without our blog.

What methods did you use for promoting both your blog and your web design website, and what blog monetization tips can you share with us?

Commenting and social media (especially Twitter) were big things in the early days, and also paying it forward was very important. You have to recognize and honor the contributions of the people that came before you and helped you by their experience and example to achieve whatever it is you wanted to achieve.

For the web design stuff, I think you really have to embrace your other interests and get the work that way—if you just set up a web design blog, then firstly you’re competing with some real heavyweights and secondly, if you’re writing about web design stuff, that might not interest or reach the radars of potential clients. People who need websites probably aren’t reading about how to design and build websites—you have to go where they are.

I’ve found that there are people who enjoy travelling (or snowboarding, or cooking, or painting) who also happen to need a website. Currently, over 50% of my work comes in via Never Ending Voyage from people who read about our travels, find out that I do web design and then get in touch.

It’s also pretty interesting how different the first contact emails are between those who found me through Never Ending Voyage and those who find me direct through Line In. The ones via Never Ending Voyage are generally much more informal and friendly, often filled with client’s anecdotes about their own travels and holidays, which starts the relationship off on the right foot. Already, you have something in common with the client.

In terms of monetization, advertising is, generally, the primary source of revenue for most blogs but I kind of feel that the quicker you cut out advertising and start selling your own products, the better. We have released our first free eBook and we’re working on our first paid one and we’ve working on travel-related iOS apps too.

I considered doing premium WordPress themes and got as far as building a responsive framework but in the end we decided against it because our constant travelling would make supporting it difficult.

What hardware do you use for your work?

I use a 13″ MacBook Pro with a Wacom Bamboo tablet, though I’m excited about these rumours of a 15″ Air. Erin just got a 11″ Air and it’s super light but with the same screen real estate as my Pro, so I’d love to see how much more we’ll get with a 15″. I also run a virtual Win 7 and Win XP box for testing websites on IE. 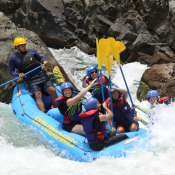 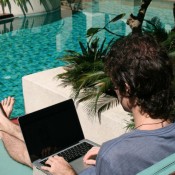 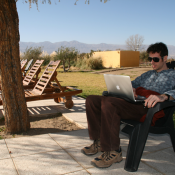 Do you have any software tools or online resources that you use on a daily basis?

Photoshop, Illustrator and a good old fashioned pencil and paper for design stuff. I’ve tried designing direct in the browser but that just doesn’t work for me.

Sublime Text 2, Codekit, SASS and Compass for WordPress development. Both SASS and LESS are amazing CSS preprocessors and I highly recommend either of them (though I just switched to SASS from LESS as it’s a lot more powerful).

I use SVN via Cornerstone for version control (mostly because that’s what the WordPress plugin directory uses) and Mantis for bug tracking.Online, both the WordPress codex and the PHP docs are valuable resources but it’s also worth taking the time to read through the code itself.

Can you mention some plugins that you find yourself relying on when developing new WordPress sites?

Often I’ll roll my own plugins using stuff from other sources (like jQuery plugins). This allows me to integrate things tightly with the custom framework I’m using so I can combine and compress scripts and styles in an effort to reduce http requests and speed up sites. It also allows me to keep things up to date on my own schedule.

I realise that caching plugins can do this concatenating and compression for me, but so many plugins misuse the !important declaration in their CSS or their javascript is buggy when minified (JSHint has really helped me clean up my scripts), that I’ve found it to be easier to just do certain things myself.

Having said that, my go-to SEO plugin is Yoast’s SEO and I love BackWPUp, which is powerful, easy to use and integrates with so many online storage services (like Dropbox or SugarSync) that backing up off-server is now automatic. W3 Total Cache is also indispensable.

On the front end, I’m a fan of Simple Facebook Connect and I like YARRP as a related posts plugin mostly because I can create my own templates.

Tell us a bit about your plans for the next few months.

We’ve booked an apartment in Tuscany for a month where we plan to spend the whole time eating, although hopefully I’ll find some time to launch our next iOS app!

Thanks Simon and good luck with your work and travels!