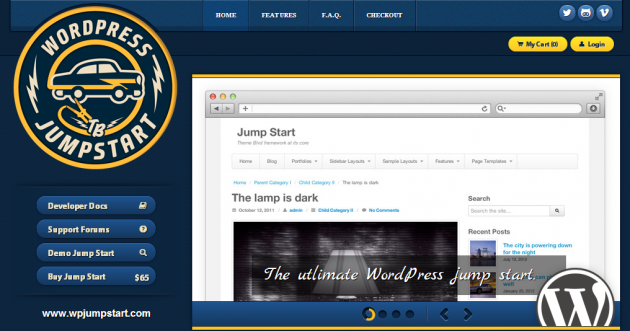 The recent release of my Parent theme framework, Jump Start, is so much more to me than just another WordPress product for sale. It’s a culmination of everything I’ve been working on since I was young developer in college and was exposed to this amazing open-source platform that we have all grown to love, and that many of us have built our lives around.

I’d be lying if I said that, in the beginning, I wasn’t looking for a way out of that eight-to-five web developer job at that local advertising agency my first year out of college. We’ve all been there, right? But as financial troubles have dissipated, my passion for simply creating the best products I can and not rushing things has increased.

A while back, as my little Theme Blvd brand grew and sales and support increased, I quickly began to get overwhelmed. I finally understood how important having a true “framework” was. It doesn’t take a genius to see that the concept of having a shared, organized code base across multiple WordPress themes could make management and creation of new themes much easier and more efficient.

A new framework from scratch

A couple of years ago after this realization, I made the bold decision to re-do everything, start from scratch, and re-think every piece of my WordPress themes. At first I did explore what was out there in terms of other theme frameworks I could build from, but inevitably decided that just wasn’t my style. No more shortcuts. No more code snippets from the Internet. I knew this was something that I had to build from start to finish if I wanted it to fit my exact vision, and encompass everything I had learned from selling themes and interacting with buyers.

If you know anything about how ThemeForest works, and the sea of WordPress themes that get churned out there, you know that one of the most common way to stay on top of the marketplace is for authors to be consistently releasing new themes. So the thought of taking some sort of hiatus from the marketplace with now no other source of income was scary, to say the least.

I’m sure buyers were beginning to think I had simply vanished from selling themes, but truthfully I was working every day on this new framework for what ended up being about eight months at the end of it all. At one point, after an inspirational weekend at WordCamp San Francisco, I even re-did everything I had been re-doing! And as things began to evolve and I developed more of a solid foundation for where I was headed, I then began to incorporate some awesome third-party parts and expand on them.

The release of the framework

In late 2011, it honestly felt like I had finished some kind of journey. I was so nervous to post that first theme called Swagger. I’ll never forget how positive that initial response by everyone was when I finally posted that theme. Soon to follow were some more new themes and some complete makeovers to some old ones to incorporate the new framework.

I was getting a lot of positive feedback from buyers on what they could do as the WordPress end-user, but I wasn’t really hearing much from the developer crowd. Maybe it’s because they aren’t the ones that needed as much customer support or the ones that initially are drawn that elusive list of “must-have” features, but I really wanted people to know just how flexible the framework was for development.

So, I started really shoving it down people’s throats to always use a Child theme for any kind of customizations. I made some basic videos on how to do this and included an example Child theme with every theme package. When someone would ask, “How do I change that button from blue to red?” I would answer with the same paragraph with tips on making CSS edits and explaining what a Child theme is. It wasn’t long before it started happening, but to this day I’m still amazed to see that when one of my buyers asks a question in support, and I click through to their website, usually they’re already using a Child theme, no matter what kind of question they’re asking.

An idea for something more

When I originally designed the framework, I wanted every piece to be as extendable as possible, and so that’s how I built it. After this little Child theme revolution began, I started to attract an additional crowd of folks asking me questions I was surprised to see. People would ask things like, “I’m in file XYZ and I see this array with a filter ‘themeblvd_whatever’ and I’m wondering how I would modify it from my Child theme to do…” — Um, wow. This is such an awesome thing to see as a theme author.

And soon I had some people asking me if they could even buy a “stripped down” version of the “Theme Blvd framework.” People wanted to work with the framework itself, but not have to muck around with all the complex styles and options of other pre-built themes.

The concept of creating a some sort of blank version of the framework to sell obviously wasn’t an original idea and most likely not something that would amount directly to some kind of big financial gain for myself, but I was able to see some benefits to doing this in relation to the bigger picture.

The creation of Jump Start

I had only been been back at ThemeForest for about three months but now had some themes built from this new framework. So I figured what’s the harm in taking a month or so off to consolidate my theme framework into a nice looking default theme and finally write some developer documentation? Easy, right?

This somehow turned into a journey bigger than the last. This resulted in another lengthy hiatus from any new themes that still hasn’t ended. I wasn’t just working on Jump Start for the next nine months, but I was making improvements to the framework itself and combing over every piece.

And after endless fine tuning, way too much of Dr. Pepper, and contributions from all of the awesome beta testers that volunteered, I’m now proud to finally have the Jump Start theme for sale outside of ThemeForest on my own little corner of the Internet at WPJumpStart.com. It contains what I’m most proud of all in one little package. And along with that, I finally have a growing library of developer tutorials out there every day contributing to more and more people finally understanding what exactly a Child theme can do, and the true flexibility or WordPress actions and filters.

Yet another theme framework

So do we really need yet another theme framework out there? — Maybe not, but I suppose it depends on how you look at it. Whether it’s something as massive as Genesis, something as uniquely developed as PageLines, something with as many options as WooThemes Canvas, or something as simple as Underscores, you have many different options available to you.

And so while there are tons of great, unique ways you can be empowered to start your next WordPress website, I’d like to think that you now have one more. Some of my approaches to Jump Start might not get me as many sales, but I do have some unique views with the project. If you’ve ever interacted with me in the support forums, you’ll know how passionate I am about certain principles.

So with that in mind, Jump Start is not the type of Parent theme framework that is going to convince you that you’ll somehow rank high in the search engines without unique content and building links to your website over time. I can’t promise you that you can make a completely unique Child theme without any knowledge of basic CSS, HTML, or maybe even a little PHP.

Jump Start gives you a nice, responsive starting point to build off from a Child theme. It contains a flexible markup structure for you CSS pros to work from, but also an intricate action hook system for you folks that just can’t help but move stuff around. A lot of thought has been put into the initial frontend design with the structure of the CSS, subtle integration of Twitter Bootstrap, and how this all ties into Jump Start’s somewhat unique, optional safe CSS-hacker approach to Child themes.

And on another note, I’m personally not a fan of opening up a file of my theme and seeing some single call to some framework function where I’m expecting the template file to be. When you open up Jump Start, you’ll see a unique combination of readable template files, flexible markup, and customizable action hooks. Jump Start is designed around you being able to utilize the markup and actions to mimic the layout, but if you require copying that header.php to your Child theme the classic way, you can always do that, as well.

In addition to everything being hooked, filtered, and ready to edit from your Child theme, there are also some cool API functions that simplify some of these processes for you. There’s a complete theme options API for giving your client whatever options they require. The original foundation behind the built-in theme options system was adapted from Devin Price’s amazing Options Framework. The API functions then extend on to some of the most popular Theme Blvd features that have recently been moved to plugins (where they belong) like the Layout Builder, Slider Manager, and Widget Area Manger.

I could rant all day about what’s in my framework and Jump Start, but I’ll spare you for now.

Jump Start has only been out a couple weeks, but I’ve already been working on some major improvements to the interfaces around the Layout Builder, Sliders, Widget Areas and continuity of how all of these are edited by the end-user on a specific page.

In all honesty, I would love to get back to posting some new themes on ThemeForest and making a few more sales, but there is still work to be done. I need to finally get a centralized Theme Blvd website up that explains everything the brand does and continue to tweak and document the framework. And most importantly, I now owe my current buyers some updates to incorporate all of the new features that only Jump Start contains.

But if you’re looking to jump on my latest and greatest, you’ll definitely want to take a look at Jump Start. I’ll be the first to admit I’m not the best frontend designer and my theme designs have begun to look pretty similar. This is why I’m truly excited to see the unique designs you all are going to come up with for your Jump Start Child themes.

While I can’t promise you that I’ll be accommodating your list of free customization requests in the support forums, I encourage you to ask me how that filter works or what that action hook does. Show me the code you’re trying to write that just won’t work, and we’ll debug it. If you truly want to educate yourself and you’re not just looking for me to provide you with an easy way out, I’m there to help. By using Jump Start, I hope that you can be empowered to learn and create some awesome WordPress sites.

My name is Jason and I’m web designer and developer in Anchorage, Alaska. I run ThemeBlvd, a brand committed full-time to providing WordPress themes. You can find our products on ThemeForest, Mojo Themes, and WPJumpStart. I design, I develop, and I’m there in the trenches with you in the customer support forums. You can learn more about me by checking out JasonBobich.com.