PageLines DMS Released – Is it a Revolution? 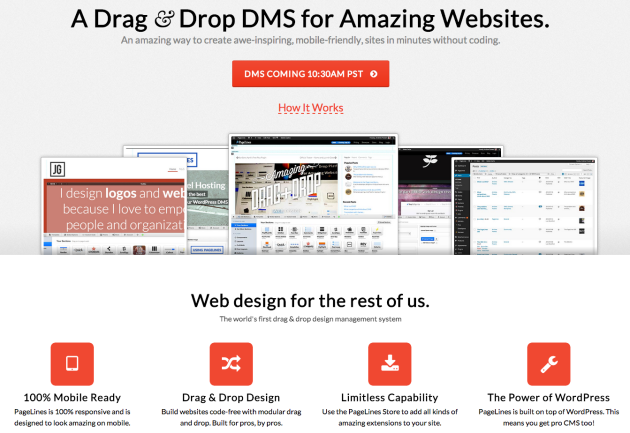 The new PageLines Design Management System (DMS) has been the talk of the town for the past 2 weeks, and it was finally released today.

Check out these two videos, the first of which is the launch video, while the second is an in-depth walkthrough.

PageLines DMS has been billed as a revolution, although this has attracted some criticism as well.

What do I think about PageLines DMS? Well, you’ll have to wait a few days until we publish our in-depth review of PageLines DMS, but for now, my initial thoughts:

PageLines DMS won’t replace the job of a web designer and web developer, but it’s a great tool for web enthusiasts who have a clear idea of what their website should look like. It empowers them to create their own website by dragging and dropping extensions onto their canvas. The combination of WordPress and PageLines DMS is very very powerful. It’s a bold move by PageLines but I think it will pay off in the long run. Services like SquareSpace have had the edge over WordPress till now when it comes to enabling non-coder types to build their own website, but WordPress is now back in the lead thanks to PageLines DMS.

I believe PageLines DMS will also be a very handy tool for developers, it will enable us to rapidly build websites, and we can also jump in to polish off websites that have already been assembled by a user. By the time the user reaches out to us developers, he will already have had time to experiment with his website, add in content, and need us where we matter the most, to give that final touch which makes the whole difference between a mediocre website and one that really brings in value to their business.

What do you think of PageLines DMS?

Previous Entry: My Transition from Private VPS to WP Engine
Next Entry: How Secure Is Your Website?