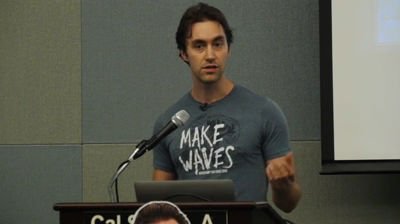 Carl Alexander has been programming since he was 8 years old. His forte is advanced topics in WordPress. He has been published in several popular online news, blogs and communities. This includes the likes of SmashingMagazine.

The answers he gave me were very candid and insightful, and anyone that programs with WordPress can hopefully benefit from these questions.

Without further ado! WP-Mayor presents the Q&A with Carl Alexander.

1) Carl, can you lay out a framework of the most important languages you use with WordPress development?

PHP is at its core a PHP application. (I know the mix with JavaScript is changing, but a lot of us still mostly use the PHP side of WordPress!) It’s important to have a good understanding of PHP language itself and not just WordPress.

That said, I’m a huge fan of going outside of your comfort zone to learn new programming techniques. If you want to stay in the realm of PHP, go look at frameworks like Laravel to see how they do things.

If you want to learn more about JavaScript, learn pure JavaScript. Or just another framework than the one that you’re using.
I like looking at new and old programming languages as well. Most problems that we’re facing aren’t new. So there’s someone out there who solved it and that person probably solved it in another language!

I think the most important resource at our disposal is source code. Most of the tools that we use nowadays are open source. Their code is somewhere (probably on GitHub!) for you to read. You should go read it.

I think reading other people’s code is one of the most underrated tools that you can use to improve yourself. That applies to WordPress development as well. You can go look at how another plugin solved a problem that you’re having.

3) What kind of plugins do you work with the most? i.e… eCommerce, blog/news, member websites.

Oh man, not sure I can answer that one that well. I write mostly custom code so I can’t speak for most plugin categories. The ones I use all the time are Query Monitor for debugging and Redis Object Cache for object caching.

4) Within the mentioned plugins, what are some of the fundamental plugins?

That said, I have a small list of plugins that I would probably look into if I needed a plugin to solve this problem:

5) Have you ever built a plugin or worked with any WordPress sites that deal with API’s or the exchange of real time or regularly updating information?

Yup! I have a paid plugin called ProductPress. It’s a small plugin who connects to the API of a service called Gumroad. Gumroad lets anyone create digital products that they can sell anywhere online.

The plugin lets people restrict content on their WordPress site unless they bought the product with Gumroad. The plugin creates a user account for the person who made the purchase and gives them access to the content. To do that, the plugin has to deal with sales in real time.

6) What are your most unique or odd ball plugins that you use and what do you use them for?

I don’t use a lot of plugins so not sure I can answer that one! lol

7) What do you think are some of the most underrated plugins?

I think that, in general, small plugins that do one thing but do it really well are pretty underrated. I’m not a huge fan of big plugins that try to do too much. Although I can understand why they’re popular since you can just use them to solve a wide range of problems all at once.

Using a two-factor authentication plugin is also pretty underrated. It’s one of the best ways to shore up the security of your WordPress site without adding too much bloat. I think everyone should use one.

8) Do you use the WP Slack channel, if so what are some your tips for getting the best information?

I’m in a few (4-5) slack channels, but I’m not super active in most of them. I’ve been trying to reduce distractions and noise in my life. Slack is one of the largest culprits of that. I don’t even have it installed on my laptop lol.

I think the best source of information is still the Advanced WordPress group on Facebook. If you’re not in it, you should be!

Big thanks to Carl and all his glory to answering the questions so honestly and candidly!

Blaze is an introvert with silent charisma. One of his favorite things to do is work. He knows It's unhealthy. He is working on that too. He really enjoys building software programs, reading non-fiction books, and helping others with their life problems. He has his head in the clouds most of the time and is working on becoming a better practitioner.