RSS, or Really Simple Syndication, is a very popular form of media delivery, even if most don’t think about it that way. You can follow an introduction to and a brief history about RSS feeds here, so we don’t have to go through that again. If you’re not sure what you can create using RSS feeds, check out this post with just some of the best ideas.

Today we’ll be taking a look at the two most popular RSS feed importing plugins in the WordPress plugin repo. These are WP RSS Aggregator and RSS Post Importer. Both plugins have free and premium versions available, so we’ll focus on the free features first then move on to the premium ones.

WP RSS Aggregator is the older of the two plugins having been launched for the first time in January of 2012. It has since grown by leaps and bounds with over 30,000 active installs and almost half a million all-time downloads. It has evolved into the most popular WordPress RSS importing plugin around and the team behind this plugin has also grown, currently consisting of 6 members with their own individual roles and responsibilities.

The continuous development of this plugin on a freemium model has led to the development and introduction of certain features that can’t be found in many other similar plugins, making WP RSS Aggregator the leader in this market having a 4.5/5 rating.

Moving on to RSS Post Importer, it was launched more recently in October 2014 and has grown considerably since then with 10000+ downloads and a steady growth with consistent updates being made.

This plugin, similarly to WP RSS Aggregator, has a premium version, however there aren’t multiple add-ons available. Instead it has a premium full text service (FeedsAPI) that users can upgrade to if they need to. It currently has a lower rating than WP RSS Aggregator at 3.3/5, and we’ll see why as we delve deeper into the two.

Below we’re going to look more closely at the options offered by the free versions of both plugins, starting with the way the feed items are imported, followed by the available settings and lastly the displaying of the imported content.

The main difference between the two plugins is the way they import the feed items from the RSS feeds in their free versions. While WP RSS Aggregator has its own custom post type named “Feed Item” for the feed items to be imported as, RSS Post Importer imports the feed items directly as default WordPress posts.

There are various positives and negatives to these two different approaches. Having said that, WP RSS Aggregator does offer the functionality to import as posts or any other custom post type in a premium add-on, but we’ll look at that further on.

Now, an important comparison one must make between these two plugins is the settings they offer.

WP RSS Aggregator gives you a large number of general options within its free version, ranging from limiting the number of feed items imported and stored by number or age, setting unique feed processing intervals per feed source or a general one, and much more as you can see in its extensive documentation.

Among its other interesting features are the ability to create a custom RSS feed based on the feed items you’re importing, as well as a great selection of display settings that allow you to modify the look of the imported items on your front-end. 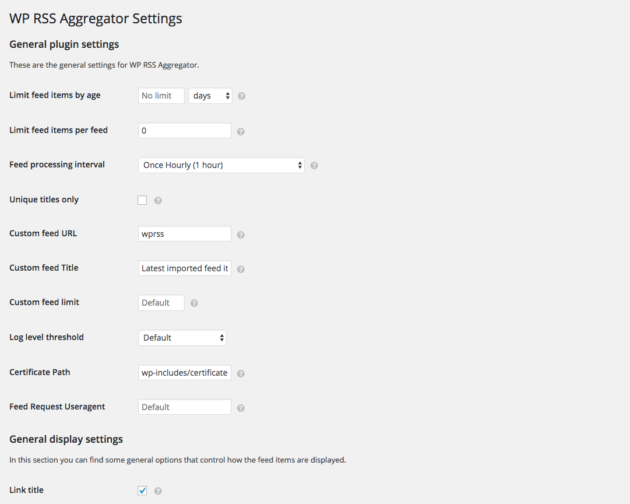 RSS Post Importer’s settings are a bit different since you’re importing as WordPress posts, so you have settings available that are only available in WP RSS Aggregator premium add-ons, such as allowing comments, setting post status, disabling featured images, and many more.

You will also note that some settings aren’t available since they require the premium Full Text RSS Key in order to be activated. Having said that, you have enough settings for a basic setup to import the content you desire into your website’s blog.

It also includes an interesting Stats section at the bottom of the settings page where you can track feeds imported, feeds shared and the total posts imported everyday. 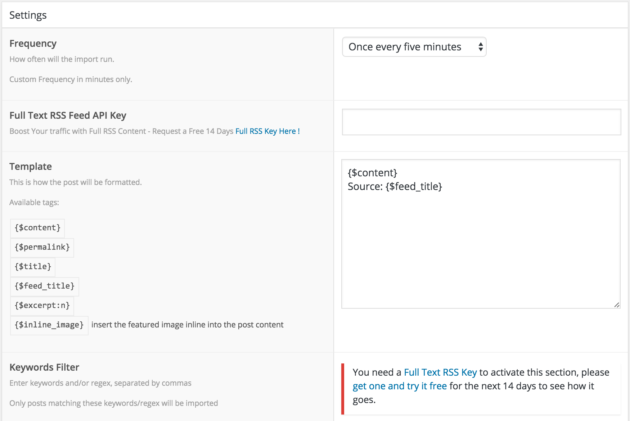 Some of the available settings for the RSS Post Importer plugin

On to the most important aspect of the plugins for your site’s visitors; the actual displaying of your imported content. Once again, there are obvious differences between the two plugins.

, either by placing it on any page or post of your choice, or by using it directly in templates.

Either way, the feed items will be displayed based on the settings you chose earlier. Should you want to style the display of the feed items you can do that too, just take a look at the available styling options here. 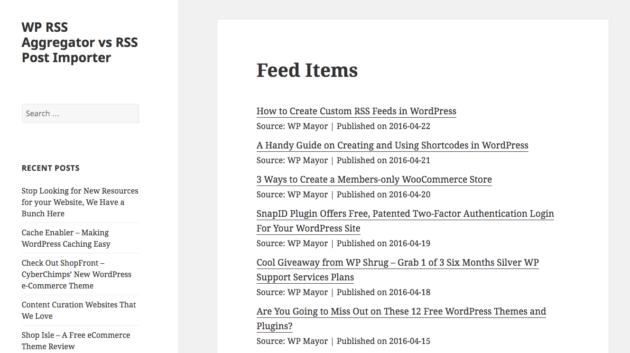 RSS Post Importer on the other hand will display the imported content in your blog along with your other posts. This does mean that content will look like similar to your own posts in a blog style, however it can only import the content available in the RSS feed, so if there are no images and a very short excerpt, you still won’t be displaying too much (without the premium version).

Depending on your needs, this might just work for you, and you can even make use of third party plugins and different themes to style the content in the way that you want. 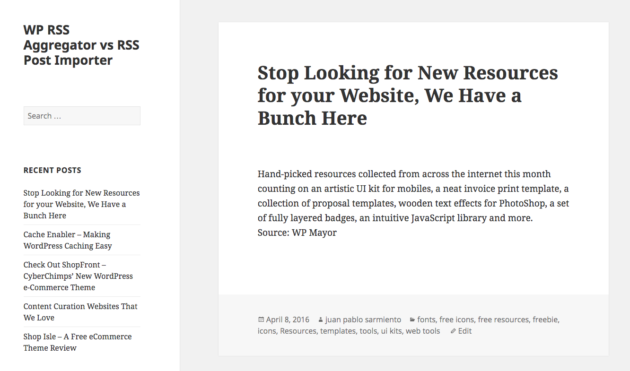 Posts imported by RSS Post Importer into the Blog.

Here are where the true colours of WP RSS Aggregator can be seen; its premium extensions. Whether you’re looking to enhance the look of your feed item list and keep using the shortcodes, or if you’re looking to import the full content of the original articles as WordPress posts or any other custom post type, these add-ons will be a great investment.

There are also two bundles available that bring together the most popular add-ons at a discounted prices; the Simple Feeds Bundle and the even more popular Advanced Feeds Bundle. All of these are offered as yearly licenses. 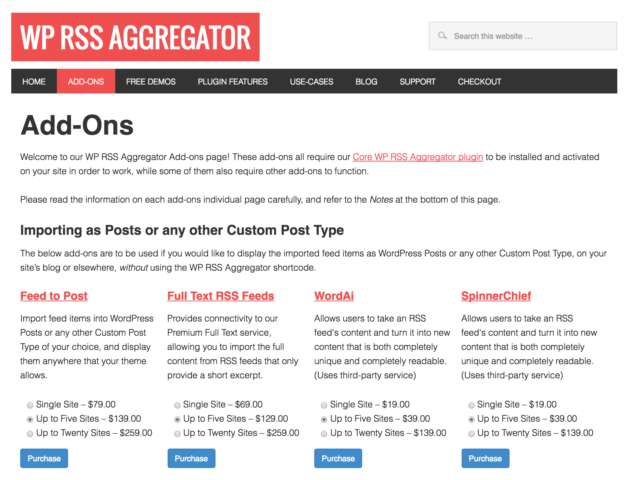 With these add-ons you can add excerpts and thumbnails to your feed item list for a more colourful look; filter the content being imported based on keywords, phrases or tags; import your feed items as any post type, setting featured images, original authors, and much more; import the full content of posts when the RSS feed only provides excerpts; spin the content being imported; and much more.

RSS Post Importer uses the FeedsAPI full text service to enable you to import the full content of posts even when an RSS feed only provides a short excerpt. Purchasing this service is what will enable the extra settings for this plugin, such as keyword filtering, the ability to import already deleted posts, and the import and export of CSV and OPML files. 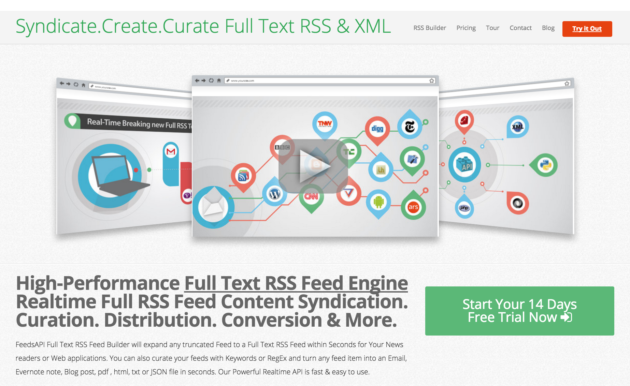 Where to Use These Plugins

There are so many use-cases for these plugins that it’s impossible to mention them all. You can take a look at WP RSS Aggregator’s list of use-cases and it’s showcase to get just an idea of what’s possible.

Depending on whether you’re using the free or premium versions, and which premium add-ons you’re using along with WP RSS Aggregator, you can do everything from creating job listings to complete auto-blogging or content curation websites, like the WP News Desk website we created recently. (Take a look at the new Dashboard Plugin and mobile apps available for it too!)

While there is no clear documentation for the RSS Post Importer plugin, WP RSS Aggregator has a dedicated documentation website that covers every single aspect of the plugins’ settings and features. 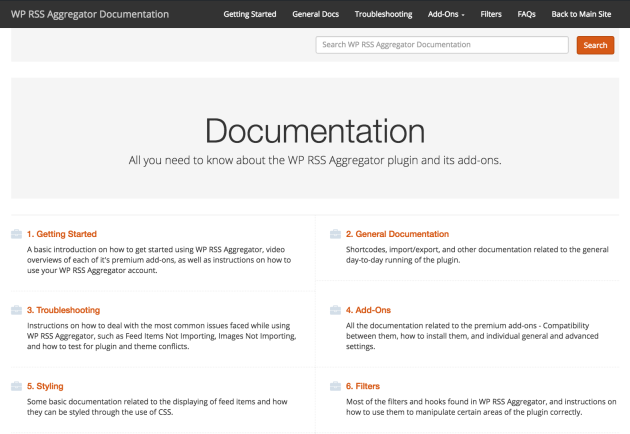 As for support, RSS Post Importer’s free .org support forum is controlled well by the plugin developers, as is the one for WP RSS Aggregator, both responding to questions within a few days at most, if not hours.

WP RSS Aggregator then also offers premium support for both pre-sales questions and its premium customers. This support is well praised as is evidenced by the glowing reviews, and the dedicated team of support staff and developers do their best to help you out in any situation.

Lastly, but not the most importantly (quality comes first), are the prices of these plugins’ premium additions.

WP RSS Aggregator’s add-ons range from a measly $19 for the simple extensions to $139 for the most advanced bundle. Each add-on or bundle has three license options available; single-site, 5-site and 20-site. These determine how many websites you can have the add-ons activated on with valid license keys.

RSS Post Importer’s full text service on the other hand offers a 14 day free trial, however after that the service has three monthly payment options. These range from $15 per month to $279 per month, depending on the features you’re looking for.

Overall, both plugins offer value in their own way, and their use is dependant on how you’d like the imported content to be displayed, Having said that, and having used both plugins, I feel WP RSS Aggregator offers more value for money.

You have two display options, either as a feed item list using the shortcode or as posts in your blog, you have a multitude of settings to play around with, and a great support team to back you up.

Have you tried any of these plugins? Which was your favourite, and why?