For those of you who don’t know, Jean Galea, the founder of WP Mayor, is also the brains behind WP RSS Aggregator – the #1 RSS aggregation plugin for WordPress.

Coincidentally, a few years back we also saw the release of a WordPress theme aimed specifically at content aggregation, WP-Drudge. It’s a WordPress news aggregation and content curation template that has undergone many improvements since its conception – and it works great with WP RSS Aggregator! 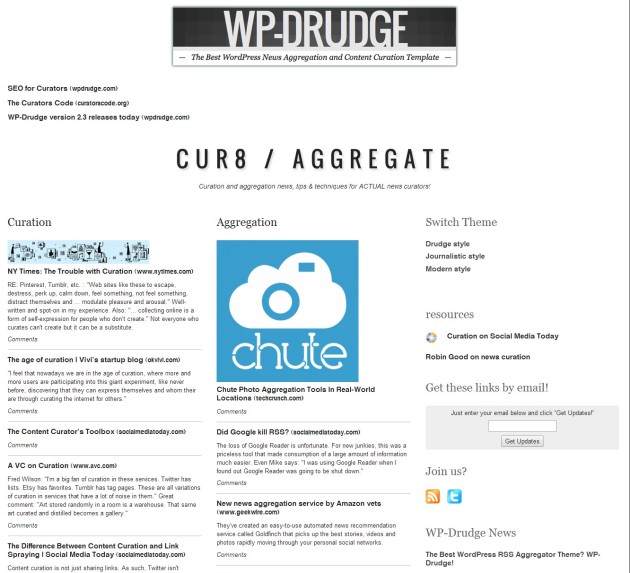 Don’t just take my word for it. The creators of WP-Drudge have themselves recently released a tutorial on using the WP RSS Aggregator plugin with their theme, and it went very smoothly.

They’ve even gone the extra mile and created a small WordPress plugin that links the two together since WP RSS Aggregator “won’t automatically add the link field needed for WP-Drudge to do its magic”. Just install it and you’re all set.

The tutorial is great and features a step-by-step guide on how to install, activate and setup every aspect of WP RSS Aggregator, from its core to its premium add-ons, namely Feed to Post and Keyword Filtering.

It goes through each and every setting you need to get everything up and running and working smoothly. So if you’re looking for a great theme/plugin combo to create a news aggregation website of any sort, you know where to find it.

Take a look at the tutorial & get WP RSS Aggregator & WP-Drudge!

CEO at RebelCode, the team behind WP Mayor, Spotlight, WP RSS Aggregator, and the Mastermind.fm podcast. Follow me on Twitter @markzahra.

Previous Entry: Reviewing the Specular WordPress Theme
Next Entry: Which WordPress Caching Plugin Should I Use?